Baltic parliamentarians convened in Riga for the 32nd Session of the Baltic Assembly and the 19th Baltic Council. Events of the 32nd Session of the Baltic Assembly were held on 28–29 November in Riga, giving a chance for the Baltic parliamentarians to address strengthening of cooperation in areas such as tourism, combating of organised crime, research and innovation, as well as establishment of a digital single market.

Vējonis explained to the audience that the basic principle of the Baltic cooperation is quite simple, but it requires efficient coordination between the parliaments and the executive power in order to achieve the goal of boosting the region’s competitiveness. He also noted that it is proper to celebrate achievements, but it is equally important to openly discuss unresolved problems. "We have made progress in combating tax fraud, the Baltic Assembly has unremittingly recognised the  importance of the Rail Baltica project and the need to strengthen the region’s energy independence; however, the lack of progress in these principal areas clearly indicates that there are weaknesses in cooperation between the Baltic Assembly and the Baltic Council of Ministers," said Vējonis.

The President of the Baltic Assembly acknowledged awareness of the time and resources required by the executive power to carry out its daily tasks, given the challenges various sectors are facing in the current economic and social environment; however, he stressed that the executive power cannot afford to merely deal with the problems as they arise but should rather focus on strategic areas of the region’s development and cooperation.

"In this context I would like to draw your attention to the cooperation within the Baltic Council of Ministers, where, I believe, there is much room for improvement. It is my conviction that the cooperation between the line ministries should be further strengthened," said Vējonis, adding that the Baltic Assembly managed to swiftly adopt a new format of functioning and develop practical partnerships in areas such as Baltic cooperation in health care, combating of VAT fraud at the European level and improving the legal framework for the supervision of financial markets.

The President of the Baltic Assembly and Daniels Pavļuts, Minister for Economics of the Republic of Latvia, who represented the Baltic Council of Miniters, within the framework of the 19th Baltic Council, which is the cooperation platform for Baltic parliaments and the executive powers, signed a Joint Statement thus agreeing on further cooperation in areas such as harmonisation of positions regarding the Eastern Partnership and protection of the common interests within the European Union, especially in the agricultural and tourism sector. Furthermore, the Joint Statement includes an agreement to cooperate in jointly seeking the most appropriate ways to diversify natural gas supplies to the region, implementing the Baltic Energy Market Interconnection Plan (BEMIP), as well as cooperation in the area of research and innovation and within the framework of energy infrastructure projects of regional importance.

Programme of the Session here

Report of the 32nd Session of the Baltic Assembly here 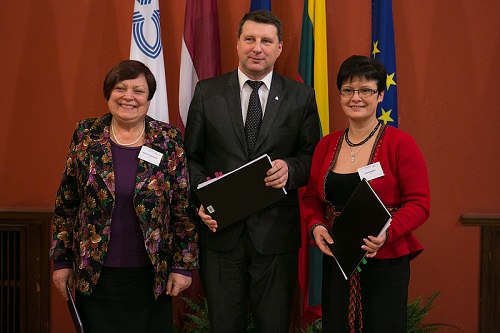 After signing the documents of the Session 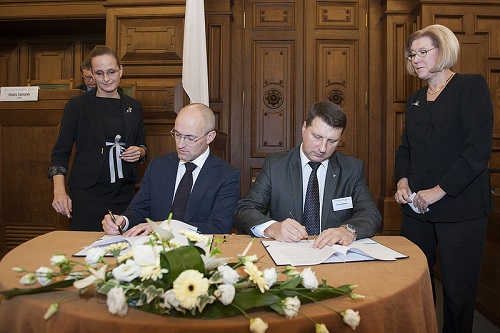 During signing of the Joint Statement

© Photos by Chancellery of the Saeima (Author: Ernests Dinka)